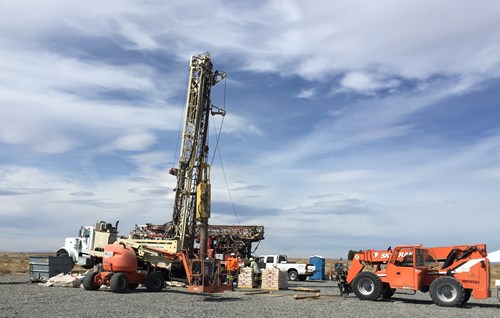 Rotary technology uses a sharp, rotating drill bit and downward pressure to cut, or crush, through the subsurface. Impact energy is supplied to the drill bit from either an above ground or down hole impact hammer. This impact force aids in the drilling. Depending on the competency of the substrate, the drill casing is advanced as the hole is cut, keeping the hole open during drilling. Competent rock may be drilled "open hole", not requiring the use casing.

There are a number of different rotary methods and techniques, each suited to perform under different subsurface conditions.  They differ in the way drill cuttings are removed. Continuous removal of drill cuttings is required in all rotary methods to keep the hole clean and the bit moving freely. Cascade offers air rotary, mud rotary, dual rotary, and reverse circulation technologies.

Air rotary drilling is a method used to drill deep boreholes in rock formations. Borehole advancement is achieved by the rapid rotation of a drill bit which is mounted at the end of the drill pipe. The drill bit "cuts" the formation into small pieces, called cuttings. This method utilizes air as a circulating medium to cool the drill bit, bring drill cuttings to the surface, and maintain borehole integrity. Once the air and cuttings return to the surface they are captured in a cyclone where the cuttings drop out the bottom. Standard split-barrel and thin-wall sampling are not utilized with this method. A broad range of coring equipment is supported for consolidated rock.

There are several variations in air rotary techniques including direct air rotary casing hammer (ARCH), downhole hammer, and under reaming.

In ARCH, often called "top drive", both rotational downforce and impact force are provided by an above-hole impact hammer and a rotating drill head. Drill cuttings are removed from the borehole by the injection of high pressure compressed air, down the middle of the drill rod, exiting out of the annular space between the drill rod and borehole. Samples of the substrate from the direct air method are often thought to be less correlative to the depth of the bit face.

Under reaming is a variation of the top drive casing advancer method that uses a rotating cutting bit in front of the advancing casing. The bit cuts a slightly larger diameter hole than the outside diameter of the casing. The larger diameter hole allows the casing to be more easily advanced in tight formations and in deeper drilling applications where the longer drill stem encounters significant sidewall friction.

Mud rotary is often used in soft sediments that may or may not be saturated with groundwater. Borehole advancement by mud rotary drilling is achieved by the rapid rotation of a drill bit which is mounted at the end of the drill pipe. The drill bit cuts the formation into small pieces, called cuttings, which are removed by pumping drilling fluid, called mud, through the drill pipe, out the drill bit and up the annulus between the borehole and drill pipe. The drilling fluid is also used to cool the drill bit and stabilize the borehole wall, prevent fluid loss into the formation and to reduce cross-contamination between aquifers. Once the mud returns to the surface, it is captured in a mud pan where the cuttings settle to the bottom and the mud is recirculated down the borehole. Additional mud is introduced as the borehole gets deeper and fluids are lost to the formation.

Standard split-barrel and thin-wall sampling are available in unconsolidated formations, while a broad range of coring equipment is supported for consolidated rock. Hydrologic conditions have little effect on mud rotary drilling and operations usually are unhindered by the presence of groundwater. Mud rotary drilling readily supports the telescoping of casings to successively smaller sizes. This isolates drilled intervals and protects lower geologic units from contamination by previously drilled and contaminated upper sediments. Mud rotary drilling can be a more advantageous method versus hollow stem auger drilling. It is a very fast and efficient way of drilling that is adaptable to a wide range of geologic conditions. Only exceptionally large, poorly stabilized boulders or cavernous conditions are unsuited for mud rotary drilling.

Dual rotary technology delivers powerful performance in unconsolidated overburden (sand, gravel, cobbles, and boulders) where other technologies struggle to drill a cased hole. This advantage makes dual rotary one of the most efficient and cost-effective methods for drilling holes in difficult formations.

Unlike other drill rigs that use only an upper drive, dual rotary uses both an upper and a lower head drive to advance the drill bit and casing. Rotational forces are transmitted to the casing via power-operated jaws. A carbide-studded shoe, welded to the end of the first piece of casing, enables the casing to cut its way through the overburden. A top drive rotary head simultaneously handles a drill string equipped with either a downhole hammer, drag bit or rolling cone bit to drill the center.

In reverse circulation, rotational and impact energy are delivered in the same manner as to direct air rotary. However, samples are obtained when high pressure compressed air is injected down the annular space between the drill rod and borehole and exits up the middle of the drill rod. Samples of the substrate from the reverse circulation method are often thought to be more correlative to the depth of the bit face and are favored in mineral exploration.

WE WOULD LOVE TO HEAR FROM YOU

Have general inquiries about Cascade and our Services?

Looking for a quote?

Ideal for drilling where undisturbed core sampling is required

Ideal for unconsolidated alluvial deposits like sand, silts and clays